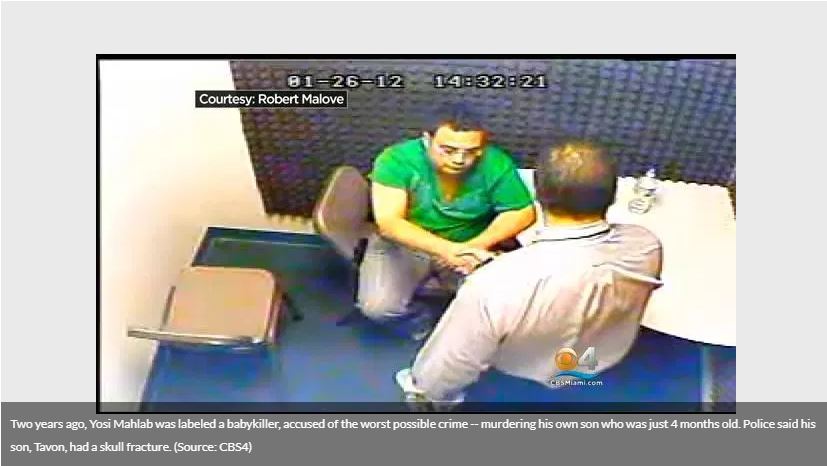 MIAMI (CBSMiami) – Two years ago, Yosi Mahlab was labeled a babykiller, accused of the worst possible crime — murdering his own son who was just 4 months old. Police said his son, Tavon, had a skull fracture.

In a stunning development, the attorney for Mahlab revealed to CBS 4 News that there was no skull fracture on the child, just a misdiagnosis from a doctor who viewed the child’s x-ray. In a court hearing last month in Miami-Dade, an Associate Medical Examiner in Miami-Dade confirmed the finding. However, prosecutors are still pursuing the case.

The investigation began on the morning of January 21, 2012 in the North Miami apartment that Mahlab shared with his girlfriend, Claire Chery, and their son. Chery was at work while Mahlab was home with Tavon and Chery’s sister and her children. Mahlab told investigators that Tavon threw up and the child was having convulsions and struggling to breathe.

“Something’s wrong with my baby,” he told a 911 dispatcher. Mahlab urgently demanded that paramedics respond. “I need you to come here now,” he said. “He threw up twice.”

Paramedics arrived and rushed Tavon to Jackson Memorial Hospital. Within days police said Tavon had no brain activity. Mahlab was charged with murder after a doctor discovered an apparent skull fracture on the child. A few days later, Mahlab was answering questions from a detective. Mahlab admitted that he tried to rouse Tavon when the boy became unresponsive and got frustrated.

Mahlab told a detective, “I smacked him twice and I threw him on the bed.”

But the detective believed there had to be more to explain a skull fracture.

DETECTIVE: “Just tell me — what did you hit him with?”
MAHLAB: “I didn’t hit him with anything.”
DETECTIVE: “When you threw him down, tell me where you threw him? And don’t tell me the bed because that may have happened once but I can tell you this instance it didn’t happen this time. Where did you throw your child?”
MAHLAB: “On the bed.”

Finally, Mahlab admitted that Tavon slipped from his arms briefly and hit his head on the nightstand. Mahlab was charged with murder. Investigators also said Mahlab waited 30 minutes to call 911causing brain damage to the boy but Mahlab denied all of it.

Mahlab’s attorney Robert Malove said there is a crucial piece of the story that has remained unknown until now. Malove said the hospital doctor who looked at Tavon’s X-ray’s made a terrible mistake, misdiagnosing a rare skull feature for a skull fracture.

“There was no blunt force trauma and there’s no skull fracture,” said Malove. “This was not a homicide. This baby was not murdered. My client did not kill his child.”

And in court last month, the Miami-Dade Associate Medical Examiner confirmed it.

The ‪Prosecutor asked: “Did you, yourself, in reviewing all of the records that are contained in the medical examiner’s file, find a skull fracture?”‬
The Assistant Medical Examiner ‪Dr. Hutchins replied: “No.”‬
‪Prosecutor: “What did you see that could have been mistaken for a skull fracture?”‬
‪Dr. Hutchins: “This child had a barren suture across his occipital bone…”‬

Former Broward Medical Examiner Doctor Ronald Wright, who is testifying in Mahlab’s defense, said that means that Tavon had a rare suture on the back of his head where a child’s skull comes together.

“It’s just a developmental abnormality,” Wright told CBS 4’s Carey Codd. “And it’ll close and it’ll scar over as you get old but when you’re a kid — 4, 5, 6 months old — it shows up on x-ray and it looks like a fracture.”

“So in your estimation was there a skull fracture?,” a reporter asked.

“No, there wasn’t,” Wright said. “For sure. The autopsy proved there wasn’t a skull fracture.”

“They were able to take this patsy of a fellow, my client, and get him to admit that he fractured the kid’s skull but guess what? There is no skull fracture,” Malove said. “He admitted to something that is false. The whole case is built on a house of cards.”

Mahlab’s lawyer says there was not a mark on the child.

However, prosecutors maintain there was trauma to Tavon Mahlab. “The State Attorney’s Office has great faith in our ability to prove that the death of this 4 month old child was not natural nor accidental but was a crime. Both Miami-Dade Medical Examiners found that the manner of death was a homicide,” prosecutors said in a statement.

In the April court hearing, Dr. Hutchins said it appeared that Tavon Mahlab had a subdural hematoma, or bleeding on the brain, that was likely caused by some sort of trauma.

Dr. Wright counters that any subdural bleeding was likely caused when paramedics worked to resuscitate the child and pumped oxygen into his brain, causing blood vessels to pop or small subdurals to form. Wright does not believe there was any trauma to Tavon.

“(Mahlab) is innocent,” Wright said. “The autopsy proved the innocence.”

Mahlab’s lawyer believes Tavon was sick for awhile — possibly with a brain issue but no one diagnosed it. Malove said Tavon had been taken to the hospital in the weeks before his death for vomiting and diarrhea, possible symptoms of a brain issue. Dr Wright said that he believes it’s unclear what killed the child.

“There’s nothing at autopsy that could explain this child’s death,” Dr. Wright said. “So, under the old criteria it’s sudden infant death syndrome.”

Ultimately, attorney Malove says Yosi Mahlab just happened to be home with his son when the unthinkable happened.

“This baby was going to die at this time regardless of whose custody he was in,” Malove said. “He just happened to be with my client.”

There will be a court hearing in the case in Miami-Dade on Wednesday. Yosi Mahlab’s attorney will be asking for prosecutors to lay out their case against his client. He hopes the judge will agree that there is no probable cause and releases Mahlab from jail for the first time in two years, as the court case continues.