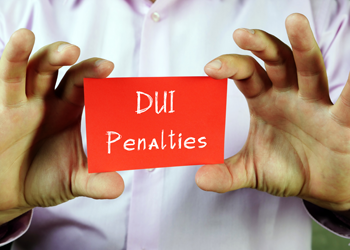 Severity of DUI penalties in Florida depend on the number of previous convictions an individual has had, as well as several other extenuating factors pertaining to the incident such as any injuries or property damage in an accident caused by the drunk driver. Those facing DUI charges can seek legal help from a Fort Lauderdale DUI defense lawyer who can discuss defense strategies and possible penalties.

DUI Penalties in Florida for a First Conviction

According to our experienced Fort Lauderdale DUI defense lawyer, and well ... the law, for a first-time conviction of a DUI, a person can be fined, ordered to complete community service, be put on probation or even face imprisonment.

The possible penalties include:

If the driver caused injury or property damage while committing the DUI, he/she could also face a first-degree misdemeanor charge that carries a maximum $1,000 fine and up to one year in prison. Fort Lauderdale DUI defense lawyer Robert Malove will evaluate the specific circumstances of the DUI charges to determine possible penalties.

Penalties for Third and Fourth Convictions

Total penalties could include:

Anyone who is facing DUI charges in Florida should contact our experienced Fort Lauderdale DUI defense lawyer as soon as possible to begin building their defense. Contact our firm online or give us a call at (954) 861-0384 to review your possible DUI penalties in Florida.