Fentanyl Crimes and Defenses in Florida 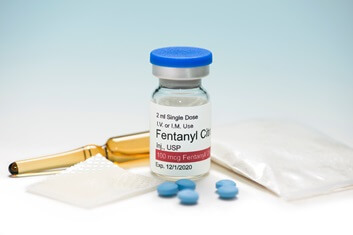 Fentanyl, a potent analgesic used to treat painful medical conditions such as back injuries and advanced cancers, is one product wreaking havoc in the illegal drug market. Fentanyl is highly addictive and extremely dangerous, causing 30,000 deaths annually across the United States.

To combat the opioid crisis in Florida, drug offenders face increased penalties and mandatory minimums for trafficking in painkillers or prescription medications. If you’re facing charges of Fentanyl trafficking or possession, you need sound legal advice as soon as possible. Having a drug charge lawyer on your side dramatically improves your chances of getting the charges against you reduced or dismissed.

You could be convicted of trafficking Fentanyl if you knew you were purchasing, manufacturing, transporting, selling, or delivering four grams or more of the drug or products containing Fentanyl. You might be charged with the lesser crime of possession if you have less than four grams of the drug, but this still could result in jail time if you’re convicted.

Fentanyl is a Schedule II synthetic opioid drug, making trafficking a first-degree felony. Florida imposes harsh sentences and penalties after a conviction, as well as the immediate suspension of your driver’s license for six months and the suspension of any professional licenses you may hold.

Trafficking carries a penalty of several years imprisonment depending on the amount of  Fentanyl in your possession:

Due to the high number of fatalities from misuse, Fentanyl trafficking has been added to Florida’s murder statutes. A person who knowingly participates in the illegal Fentanyl trade could potentially be convicted of homicide if the drug kills another person. While this allows law enforcement to prosecute dealers, it can also result in users being charged with murder if the illegal Fentanyl in their possession causes someone’s death.

As an experienced drug charge attorney, Robert David Malove is familiar with Fentanyl crimes and potential defenses. Many people arrested for Fentanyl possession are addicts who would benefit more from treatment for a chemical dependency than jail time. Depending on your situation, we may argue that:

If you’ve been arrested for Fentanyl trafficking in Florida, you need board-certified criminal trial attorney Robert David Malove on your side. Contact us online or call us today at (954) 861-0384 to begin your free consultation. We have affordable payment plans available to give clients their best chance at justice.