Your Right to Be Free From Double Jeopardy

“...Nor shall any person be subject for the same offense to be twice put in jeopardy of life or limb….”

This right, found in the Fifth Amendment to the U.S. Constitution, is commonly known as protection from double jeopardy. This same right is found in Article 1, Section 9 of the Florida State Constitution. 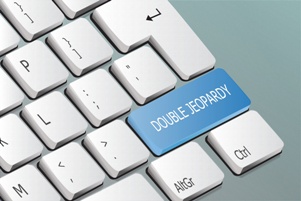 The prohibition against double jeopardy means that you can’t be tried for the same crime twice. However, the burden is on you as the criminal defendant to raise the defense if you believe that you have already been prosecuted for the crime. You could have a double jeopardy defense if the government attempts to retry you for a crime for which you were already acquitted, convicted, or punished.

Generally, double jeopardy becomes an option at the point when the jury is sworn in for a jury trial, the first witness is sworn in during a bench trial, or the court accepts a plea agreement. Even if the prosecution has new evidence, you cannot be prosecuted again unless a mistrial is declared because of jury, court, or defense attorney misconduct.

Double jeopardy applies to felonies and misdemeanors, but not to civil cases. Therefore, while you can’t be tried for the same crime twice, the same situations could lead to both criminal charges and a civil lawsuit. If you are charged with murder, for example, the family of the deceased may still file a wrongful death case against you without violating the double jeopardy clauses of the United States or Florida constitutions.

Courts make mistakes, and that is why there is a system of appeals. If you are tried for a crime for which you have already been acquitted, convicted, or punished after a jury was sworn in, a witness was sworn in, or a plea bargain was accepted by the court, you may be able to appeal based on double jeopardy.

Your Florida criminal appeals lawyer may argue that double jeopardy applies in your case and that to try you again for the same crime violates both the United States and Florida constitutions.

In some cases, you may also have grounds to pursue post-conviction relief. If your defense lawyer knew, or should have known, about a double jeopardy defense and failed to raise that defense, you may be able to file a 3.850 motion with the court on grounds of ineffective assistance of counsel.

Our Experienced Florida Attorneys Are Here To Help

If you need to raise a double jeopardy claim either on appeal or on a motion for post-conviction relief, you know just how complicated the Florida legal system is and why you need a skilled and dedicated lawyer on your side.

Our legal team has more than 60 years of combined legal experience. We represent people in criminal trials, appeals, and post-conviction motions. We understand what legal procedures to use and when to use them. Our work ethic is unparalleled, our knowledge of the law is incomparable, and our commitment to each and every client we represent is unmatched.

If you have already been tried or punished for a crime, you deserve the constitutional protection that the double jeopardy clause provides. We will make sure that all of your rights—including your right to be free from double jeopardy—are protected and that you are treated fairly. Contact us today by filling out our online contact form or calling us directly to learn more about your specific case.