If You're Under Federal Investigation or If You've Been Charged With Committing a Federal Crime, You Need Experienced Representation. You Need Attorney Robert David Malove! 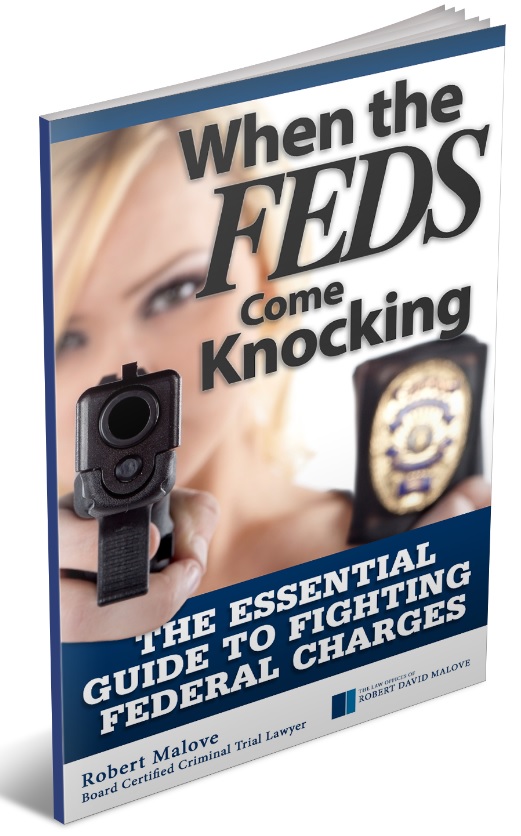 Federal law enforcement is known for its tenacity. They investigate thoroughly and prosecute with skill and determination. They are representing the interests of the USA, and once they decide to prosecute, they don’t like to lose.  But even the FBI and prosecutors can make mistakes.  Sometimes they are overly aggressive and bend the rules. The federal sentencing guidelines are comprehensive, and the judges frequently hand down stiff sentences.

But all is not lost. Your number one goal should be to achieve the best possible result for your given circumstances, and the only way to accomplish that is to hire the federal best criminal defense attorney you can. Many seemingly hopeless cases can be successfully resolved before trial. Others cases can be won at trial or handled in a way that produces a more lenient sentence.

Our firm is on the cutting edge of the developments taking place in the area of federal sentencing law. As a federal criminal defense attorney, Robert Malove understands the importance of developing a sentencing strategy throughout the case, so he's well-positioned to advocate for the most lenient possible sentence if you are found guilty.

In 1984, Congress passed the Sentencing Reform Act with a goal of removing sentencing disparities that frequently occurred under the previous system.

Prior to this Act, the system allowed for indeterminate sentences, under which a judge could sentence a defendant to a minimum and maximum amount of time without setting a definite sentence.

As a result, the actual amount of time spent in federal prison would be up to a parole board after the person began serving time. This practice was abolished under the Act, and judges were required to set a specific length of time for the sentence in accordance with federal guidelines. The guidelines established by the Sentencing Reform Act were mandatory.

In 2005, the United States Supreme Court ruled in United States v Booker that the mandatory provision of the Sentencing Guidelines was unconstitutional and held that the guidelines should be considered “advisory” and be equal among the other factors judges must consider. Since that time, several Supreme Court decisions have invited criminal defense lawyers to fashion persuasive legal arguments calling for truly individualized sentencing.

What This Means for Federal Criminal Defense Lawyers

Since the judge now has more discretion in determining sentences, they are able to consider evidence and arguments from defense attorneys to help in making the decision. This means a lot is riding on the ability of your attorney to convince the judge to hand down a lesser sentence.

​The art of sentencing advocacy is a required skill of all lawyers, but it is especially crucial in federal criminal cases. The Law Offices of Robert David Malove stays informed of changes in sentencing procedures, remains innovative in its post-Booker sentencing strategies, and is actively aware of judicial and legislative developments. While it's essential to confront criminal charges head-on, it's of no less vital importance to be mindful of developing a possible sentencing strategy.

Despite the discretion judges have, we're still dealing with a complicated sentencing system at the federal level. In a nutshell, sentences are determined based on two basic factors:

Once an offense level and criminal history points are assigned, the judge refers to the sentencing guideline chart to determine the range of sentencing possibilities. Your attorney plays a key role in influencing where within that range the judge comes down. For example, a defendant given an offense level of 4 with little or no criminal history may be sentenced to anywhere from zero to six years in prison. Your attorney can argue for less time.

Our Experienced Federal Criminal Defense Attorney Will Fight for You

An experienced criminal defense attorney representing your interests and leading you through the federal criminal justice system is the most valuable asset you can have. Our firm aims to provide the most effective and result-producing sentencing advocacy through exhaustive research, the filing of academically superior briefs, motions, and the vigorous pursuit of successful negotiations with the power of full engagement. We take our client’s freedom seriously and litigate passionately to achieve the lowest possible sanction.